The loss of jobs is the main challenge of any economic downturn and the current recession is no exception. Even once businesses re-open, the economic recovery will struggle if workers aren't called back to factories and stores. Without steady paychecks, consumers will be hesitant to spend which further harms business profitability and hiring.

For policymakers, this downward spiral occurred during the Great Depression a century ago and is something to avoid at all costs. For long-term investors, the job market provides a view into the economic environment in which businesses are operating. It's likely that these trends are more important than watching new coronavirus headlines on a daily basis.

At the moment, there's good news and bad news. The good news is that many jobs have returned in the past few months as parts of the country have eased COVID-19-related restrictions. Since May, 9.3 million jobs have returned and the number of people seeking new jobless claims on a weekly basis has fallen from nearly 7 million in March to 1.2 million today. Additionally, there are still almost 6 million job openings despite the pandemic.

Fiscal responsibility aside, some of this is the result of government support measures such as individual stimulus checks and the Paycheck Protection Program for businesses. However, expanded unemployment benefits expired at the end of July and most PPP funds will run out shortly as well. At the moment, Congress and the White House are deadlocked on passing a new bill. Until then, individuals and businesses will have to manage on their own.

Fortunately, all of these data suggest not only that an economic recovery is possible, but that it has been occurring since May. Depending on how the public health crisis unfolds, it's possible that April was the low point for the economy. The anticipation of this was one reason that the stock market began to rebound in late March.

The bad news is that we are still a long way from a full recovery and the pace appears to have decelerated somewhat. Despite recent job gains, there are still 12.9 million fewer positions than in February - a staggering number. And although there are fewer individuals seeking unemployment insurance each week, the total number receiving benefits is still over 16 million Americans.

The unemployment rate has fallen significantly, from 14.7% to 10.2%. However, this is still higher than the peak of 10% after the 2008 financial crisis. During that period, it took nearly 8 years for the unemployment rate to reach pre-recession levels. However, that was due in large part to the shifting makeup of the U.S. economy that caused many to give up on finding work. In particular, the housing bubble and the impact of technology and globalization on industrial activity resulted in permanent job losses.

The silver lining this time - to the extent we can call it that - is that many jobs may return more quickly. This is because the coronavirus was a shock from outside the economy and not the result of a collapsed financial system or asset bubble, per se. Of course, this doesn't mean that all parts of the economy will recover similarly, and there will certainly be industries that are changed forever.

But this is where it's important to distinguish between making decisions in our everyday lives and for our portfolios. Even if parts of the country are still shut down and many aspects of our lives are still disrupted, financial markets will continue to look forward. Ultimately, it's most likely that the economy will slowly continue to re-open and advance - even if there are outbreaks at a local level. This is true whether or not there is a vaccine, although that would certainly help.

Thus, as always, it's important for investors to not only remain invested, but to stay diversified. The market recovery of the last several months is evidence that the stock market reacts quickly to new information, even when investors are still struggling with uncertainty. Below are three charts that put recent job market trends in perspective.

1. Over 9 million jobs have been regained since April 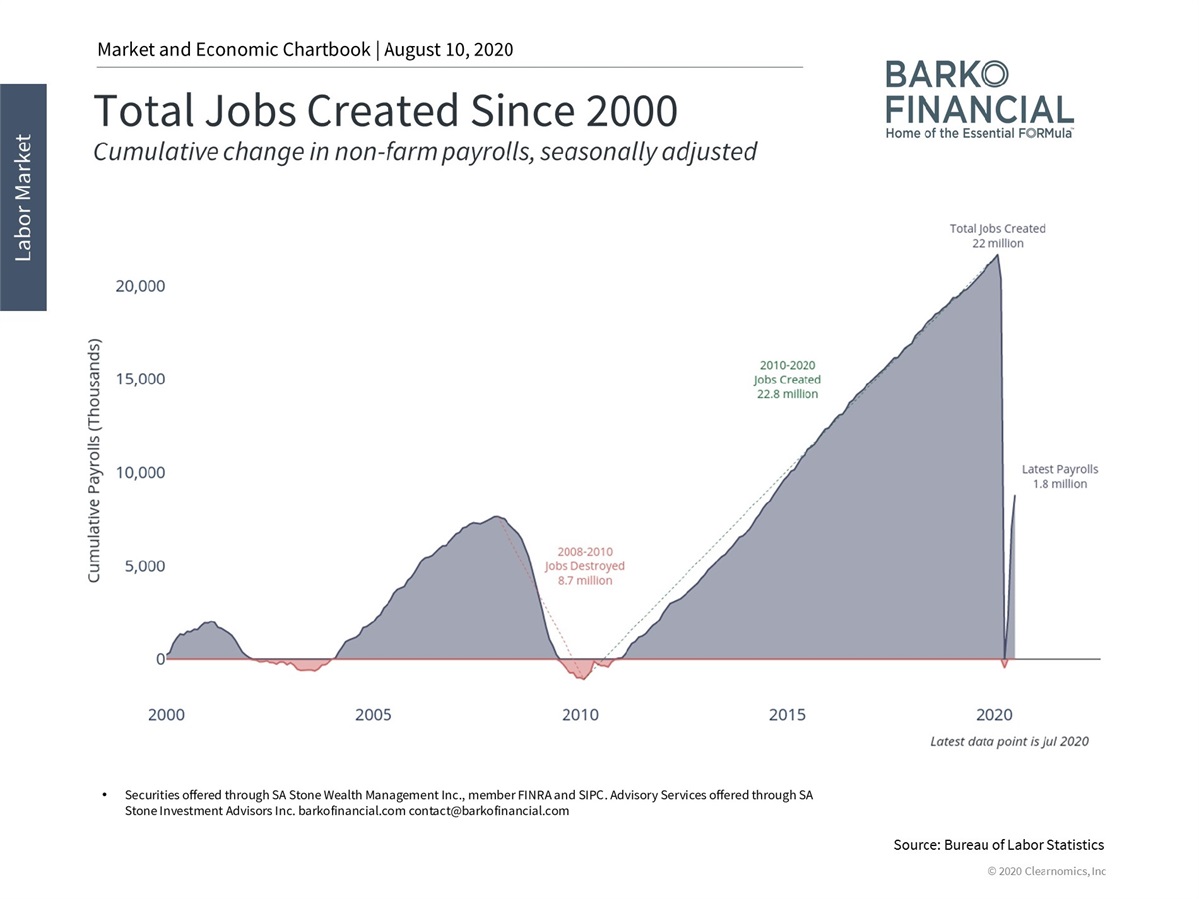 Last week's jobs report showed that 1.8 million jobs were created in July. In total, over 9 million jobs have been added since the low point in April. However, there are still millions more jobs that have been lost. The pace and path of the recovery will determine whether these jobs can return quickly or will be permanently destroyed. 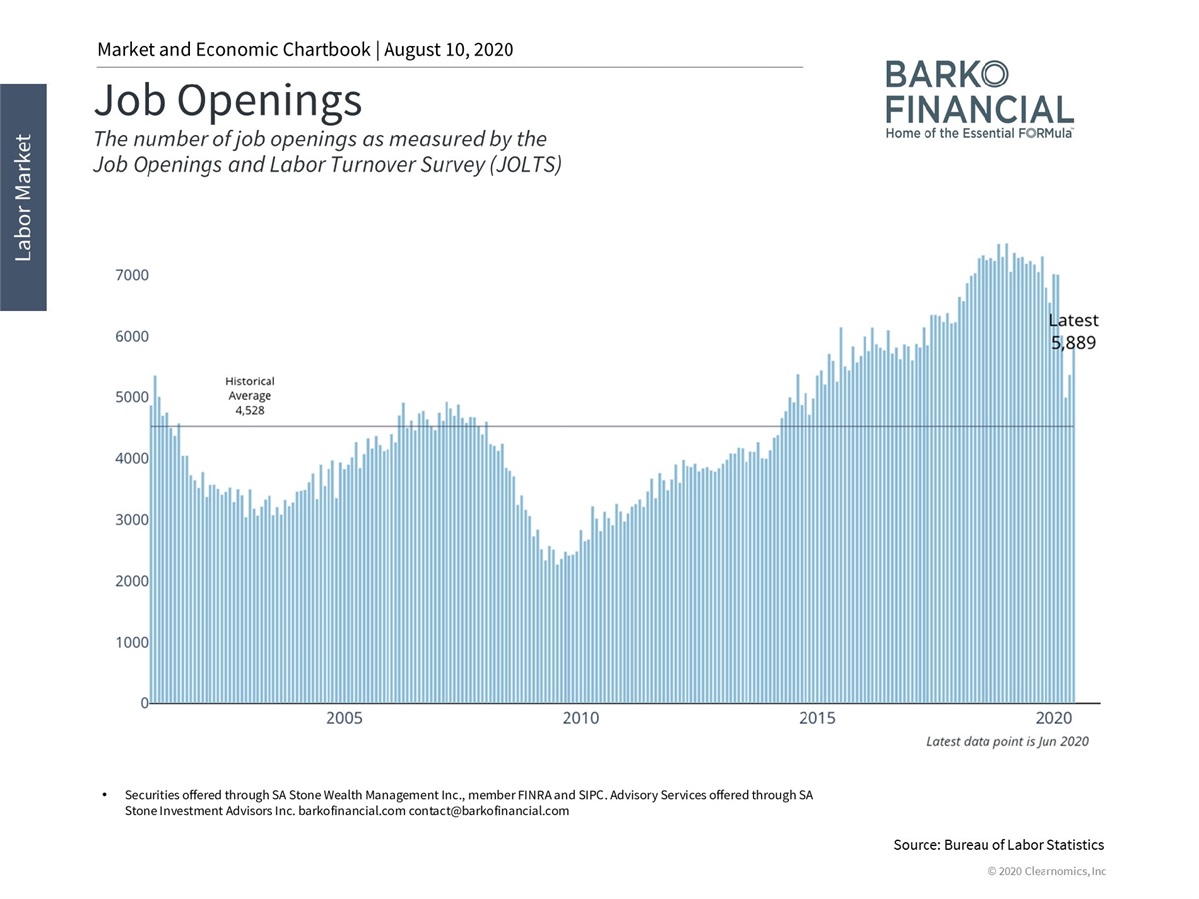 There are still 5.9 million jobs that are available and unfilled. This is an increase over the past two months as businesses grapple with economic uncertainty. In general, this is a good sign that there is demand for workers as the economy stabilizes further.

3. Unemployment has fallen but is still elevated 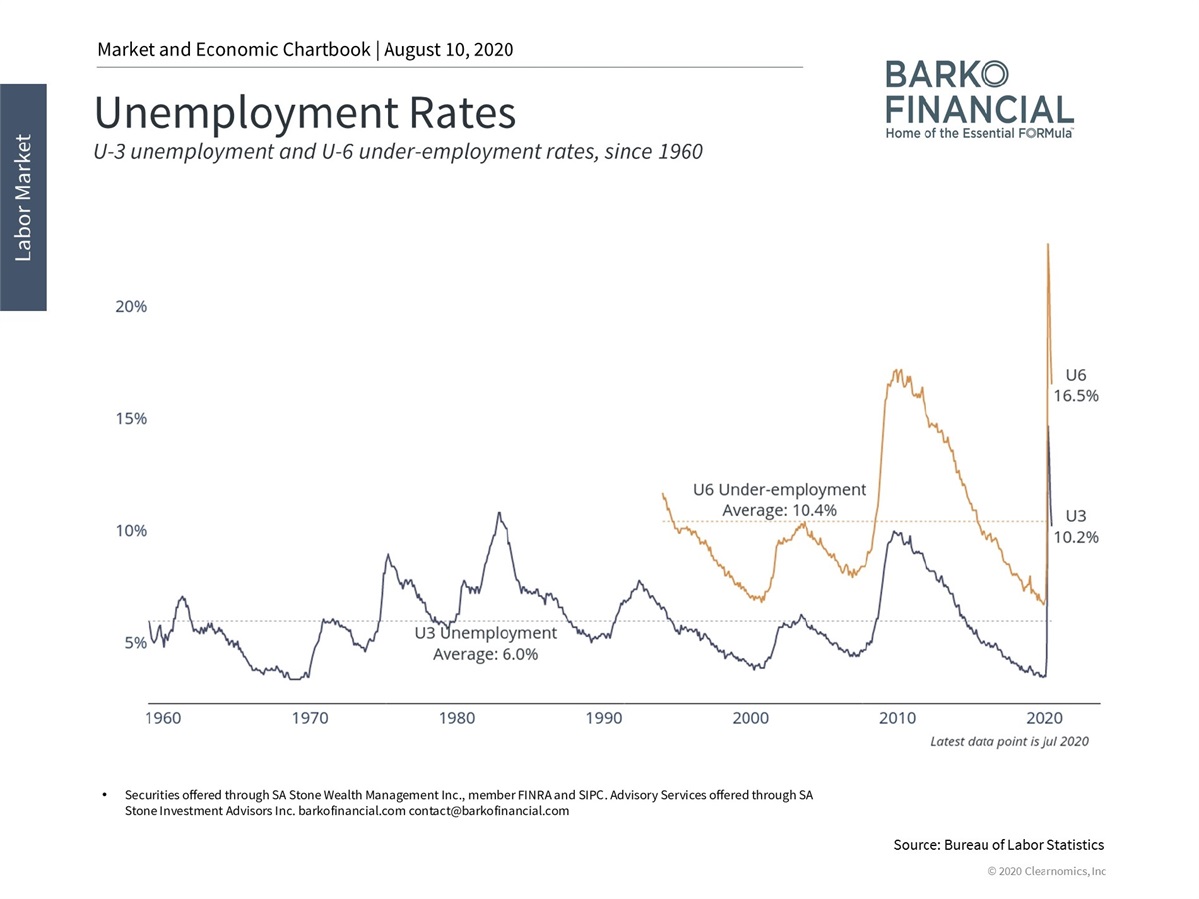 The unemployment rate has fallen significantly and never actually reached the levels that many had feared. Still, the current unemployment rate of 10.2% is still higher than at any point during the 2008 financial crisis and subsequent recovery.

The bottom line? The economy is recovering but it will take time to reach pre-crisis levels. Rather than react to daily coronavirus headlines, investors should continue to stay disciplined and diversified in order to achieve their long-term goals.