Keep Your Portfolio Out Of Politics

With the U.S. presidential election just around the corner, it's important for investors to remember what affects markets in the long run. While our votes should reflect our personal beliefs and preferences, whatever they may be, history has shown that it is best for our portfolios to stay out of politics. In other words, Americans ought to vote at the ballots and not with their hard-earned savings.

This is because, in the long run, the stock market and economy have grown under all types of leadership. There may be occasional short-term hiccups but trying to "time the market" around such events often causes more harm than good. In recent years, the Mueller investigation, impeachment vote, the Affordable Care Act, and more were expected to cause sustained stock market volatility. In nearly all cases, the market shrugged off the result and moved on. Even the trade war with China and the rest of the globe, which dominated headlines in 2019, failed to derail a long stock market rally.

This is not to say that the stock market only goes up. On the contrary, when the stock market does decline during corrections and bear markets, it is often because the underlying fundamentals have deteriorated. The COVID-19 pandemic is a clear example of this since it directly affects all parts of the economy and is fraught with uncertainty. And yet, once there was some clarity around lockdowns and case rates, the market was able to find its footing. The same was true during the 2008 global financial crisis and early 2000s dot-com bubble.

In the long run, trends in technology, finance, globalization and others have a more pronounced impact on stocks and sectors. These tend to be independent of who's in office and may last for decades. For example, the trend around information technology, the internet and digital transformation that exploded in the 1990s is still ongoing today. In hindsight, investing based on these macro-economic and sector trends would have been magnitudes more important than focusing on political headlines.

The primary issue is that it is often hard to separate our political feelings from our investment ones - one reason why it's always important to seek trusted advice. It's understandable that this is the case since Washington politics and legislation do affect our personal and professional lives, even if they don't always impact the stock market. Individual income tax rates, for instance, have been falling since the mid-20th century. High-earning taxpayers in the mid-1940s may have paid a rate as high as 94% on their marginal incomes. Even those in the lowest bracket would have paid 20% or more during the 1940s, 50s and 60s - double today's rate. Corporate tax rates had also been some of the highest in the world in recent decades until the 2017 tax cuts.

While few would like to or even expect to see tax rates return to these levels, it's undoubtedly the case that taxes are currently low by historical standards. From this perspective, planning for higher rates in one's personal finances is a necessity. From an investment perspective, however, the stock market and economy have historically performed well under a variety of tax regimes. The Post-WWII boom, which occurred during these exceptionally high marginal tax rates, witnessed several bull markets. Of course, changes to marginal income tax and capital gains rates might require adjustments to financial plans and portfolio optimization.

Thus, there are many ways in which politics matter. However, when it comes to markets and investment portfolios, there are a variety of factors that likely play a bigger role. Investors ought to consider how policy changes could affect their financial plans while staying disciplined and focused on the long run. Below are three charts that highlight how markets and the economy have behaved over the past several decades.

1. The stock market has performed well regardless of politics 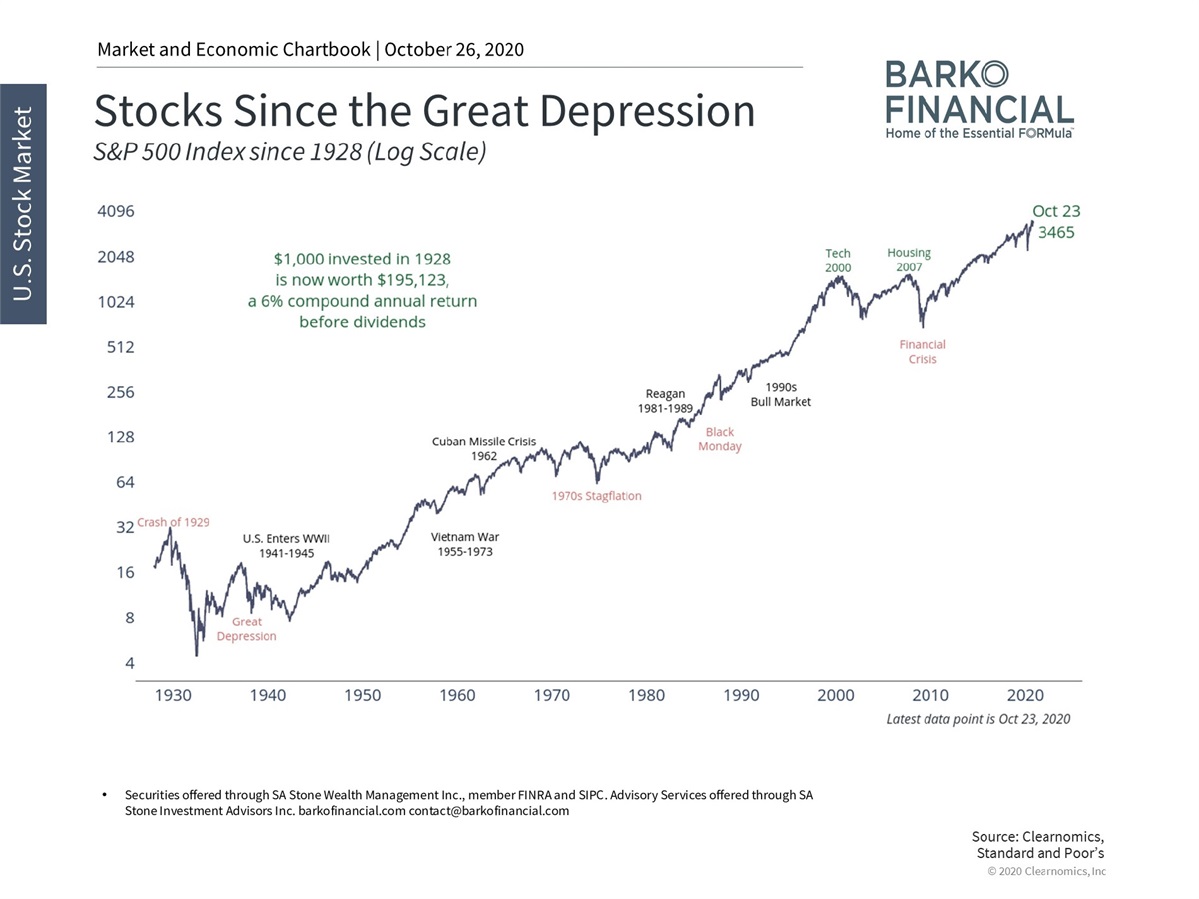 With the benefit of a long time horizon, it's clear that the stock market has performed well since the Great Depression during which there were seven presidents from each party. While there have been periods of short-term volatility every several years, this has more to do with business cycles than politics. In many cases, the stock market continues to grind higher despite negative headlines. 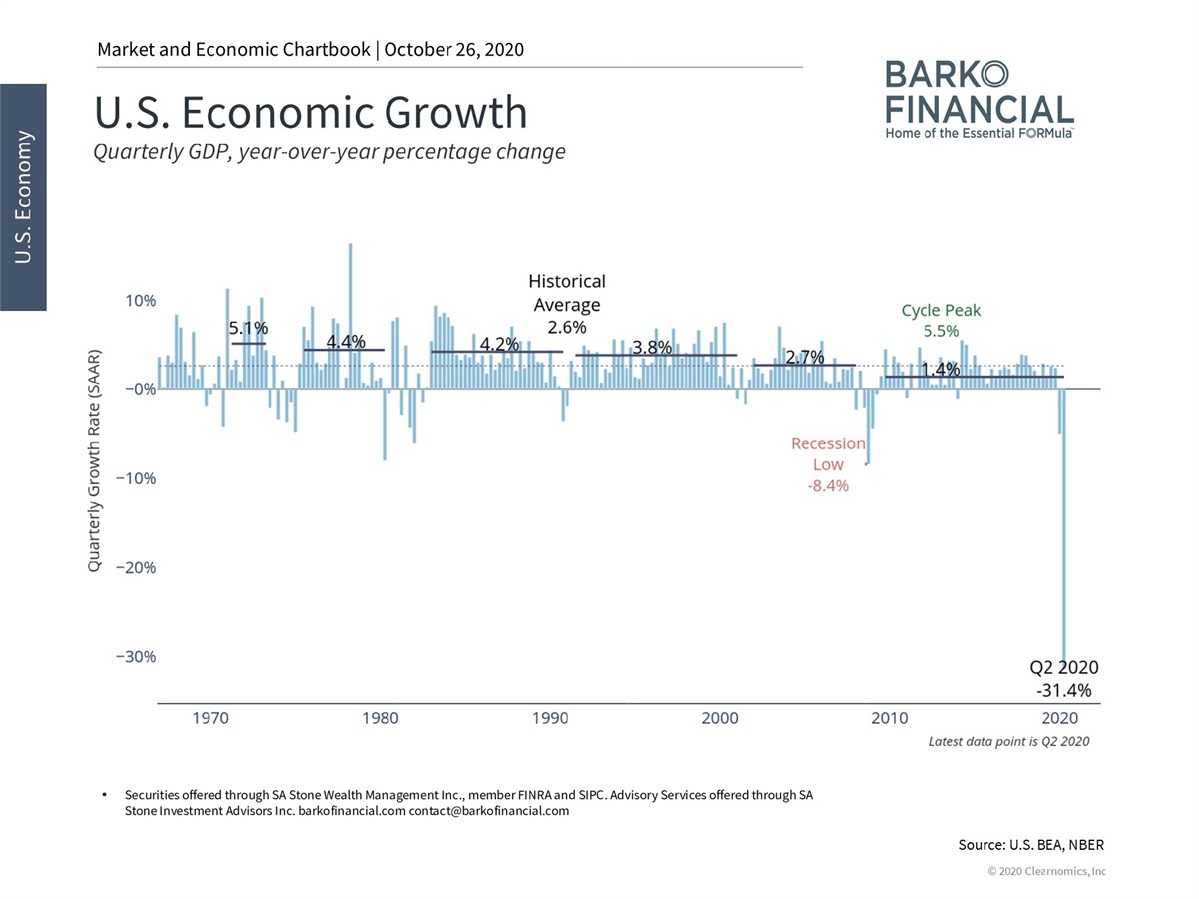 In the long run, a growing economy can provide a foundation for stock market growth. In general, bear markets tend to occur during recessions when corporate profits fall. While GDP growth has been slowing, this has more to do with the size and age of the U.S. economy than with Washington politics.

3. Taxes are quite low by historical standards 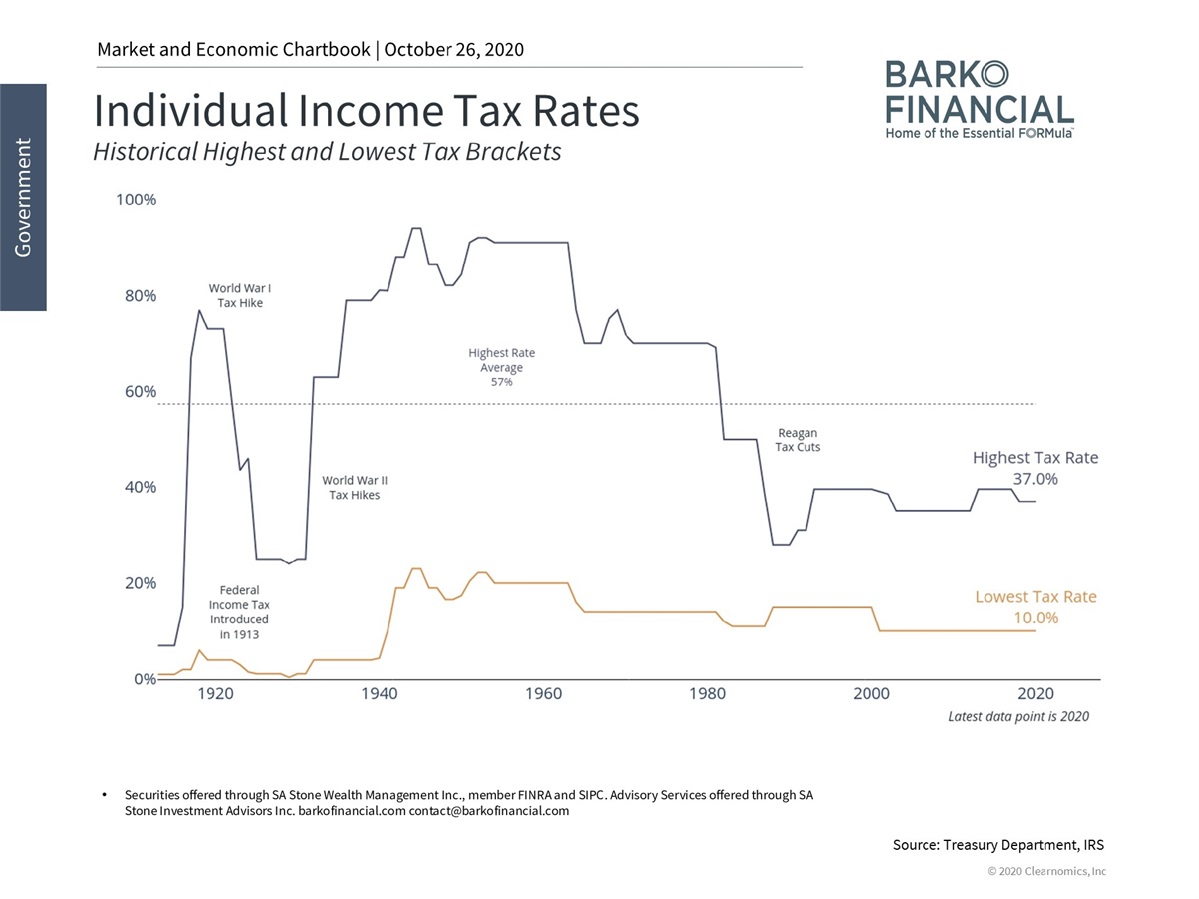 Tax rates are low compared to their historical levels during the mid-20th century. Taxes affect all Americans but markets have done well even during periods of high marginal taxes, such as during the early 1960s. So, while income tax rates can affect financial plans and possibly portfolio optimization, it's not a given that they directly affect markets as a whole.

The bottom line? Americans ought to exercise their right to vote in the presidential election. However, investors also ought to stay disciplined and not over-react to political headlines in the weeks to come.