With financial markets recovering due to economic optimism, reduced political uncertainty and the rollout of COVID-19 vaccines, interest rates have also increased. The 10-year Treasury yield recently crossed 1% for the first time since last March when the pandemic reached the U.S., after fall ing as low as half of one percent in the summer. Despite this, rates are still near 40-year lows due to long-term macroeconomic trends. What signals are interest rates sending today and what should investors expect?

Interest rates play many roles for investors. Not only are they important for savers and borrowers, but their level and direction provide an important signal of the health of the economy and financial system.

There are a few ways to think about this. On a theoretical level, interest rates reflect expected GDP growth and inflation. If the economy is expected to grow quickly, and/or inflation is expected to pick up, this should also push interest rates higher. If consumers and businesses are optimistic about the future, borrowers may accept and lenders may require a higher "price" for capital, whether for buying a house, starting a business or building a factory.

This also depends on the expected path and uncertainty of interest rates across different time frames. The fact that the shape of the yield curve is steeper today - i.e. long-term interest rates are higher compared to short-term ones - is generally a positive sign. The yield curve is often quite steep early in a business cycle when there is growing optimism and the federal funds rate is still low. The opposite - a flattening curve and, at the extreme, an "inverted" yield curve - is often a sign of economic stress and even a looming recession.

On a more practical level, investors tend to buy Treasuries and other lower-risk bonds during times of economic stress. This increases the prices of these bonds which lowers their yields. The opposite is true when there is economic and market optimism - bond prices will tend to fall as investors buy riskier assets, which pushes rates up.

All told, the rise in long-term interest rates since last summer reflects the same factors that have boosted the stock market. There is greater economic optimism since businesses began to reopen following the nationwide shutdown, there is less uncertainty following the presidential election and inauguration, and COVID-19 vaccines are being distributed across the U.S. and around the world. Although many people continue to struggle with pandemic restrictions, the economy and financial markets are no longer in crisis mode. Thus, it is reasonable to expect rates to slowly return to pre-pandemic levels if the recovery stays on course.

However, it's also important to keep the broader historical context in mind. Interest rates have been declining since the late 1970s for a variety of reasons that have nothing to do with short-term crises. Technology, globalization, worldwide cash savings, and other factors have conspired to push interest rates lower decade after decade. These effects pre-date the pandemic and even the 2008 financial crisis. The fact that the Fed responded to these emergencies with extraordinary monetary policy, alongside other central banks, has only magnified their impact.

Of course, there have been periodic spikes in interest rates over the past decade. This happened in 2013 when the Fed announced its "tapering" program to begin shrinking its asset purchases. Today, the Fed's balance sheet has instead grown by an additional $3 trillion. This also occurred after the 2016 presidential election, partly due to reduced political uncertainty and partly to expected pro-growth policies. In both episodes, the 10-year yield rose above 3% briefly before falling again.

Thus, despite recent interest rate movements, investors ought to stay balanced when considering long-term rates. While it's positive that the economic and market recoveries have pushed rates higher, they are still near multi-decade lows.

For borrowers and homeowners, mortgage rates remain very attractive. At the moment,the average 30-year fixed mortgage rate is hovering around 2.8% - around the lowest on record. Along with pandemic-related homebuying demand, this has helped boost housing prices around the country.

For savers, the challenge of generating sufficient income from cash and high-quality bonds will likely continue. This potentially means that finding alternative sources of income, from high-yield bonds to dividend-paying stocks, is still as important as it has been since 2008. Below are three charts that provide perspective on interest rates over the past several years and decades.

1. Interest rates have risen recently but are still near multi-decade lows 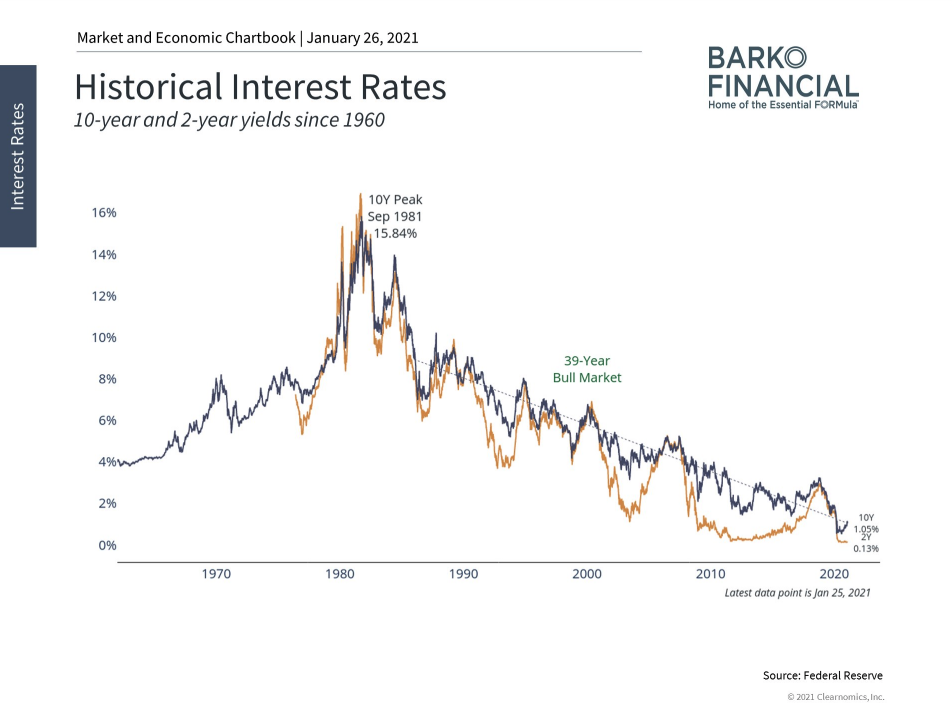 Interest rates have been rising since last summer and have accelerated higher in recent weeks. Still, rates are near multi-decade lows due to long-term economic trends.

2. The yield curve has steepened which is a positive economic sign 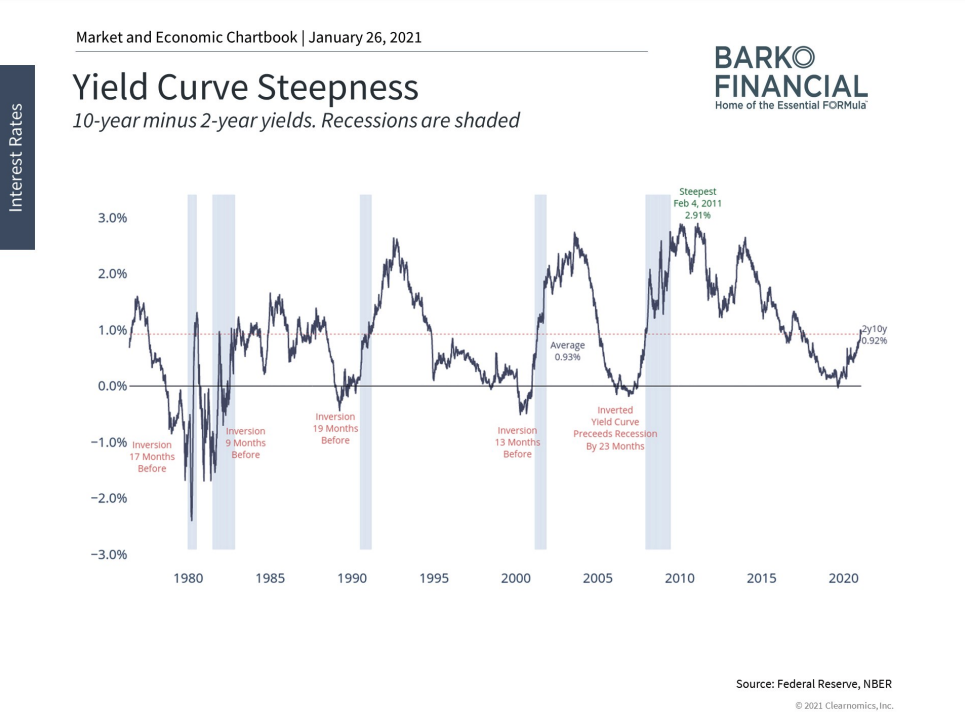 The yield curve have steepened due to rising long-term rates at a time when short-term rates are still pinned down. This is generally a sign of economic optimism and tends to occur early in business cycles.

3. Lower rates are still great for borrowers and a challenge for savers 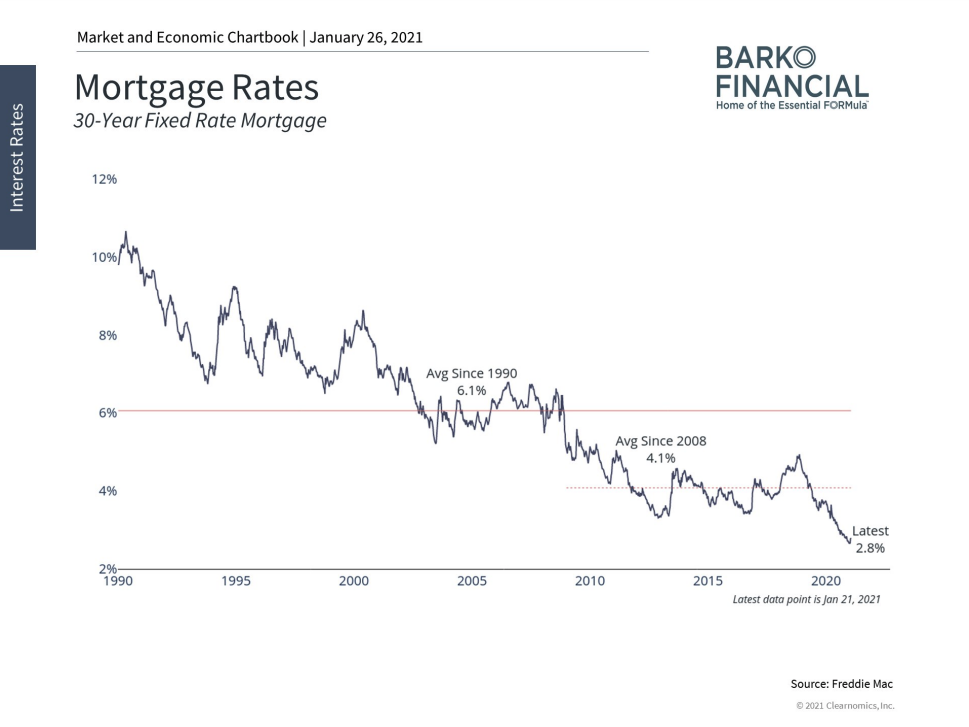 Lower rates are a mixed blessing, depending on whether you are a saver or borrower. For the overall economy, lower rates could help to promote home buying and other commercial activities.

The bottom line? Investors should continue to be cautious around interest rates. Many investors, especially those in or near retirement, will likely need to stay balanced and continue to find alternative sources of portfolio income.

If you'd like to review options for a Distribution Strategy, schedule a time <<HERE>>