The Economy Is Recovering Despite Election Uncertainty

Despite short-term uncertainty around the presidential election and recent stock market turbulence, there are clear signs that the economy continues to recover. The latest GDP report for the third quarter shows that growth surged after the COVID-induced recession began during the first few months of the year. For investors, this is another reminder that focusing on long-term trends rather than day-to-day headlines can improve the odds of achieving financial goals.

Specifically, the economy grew in the third quarter at a 33.1% annual rate, the fastest quarterly growth rate on record. This is after it fell by 5% in Q1 and 31.4% in Q2, prompting the National Bureau of Economic Research to declare that a recession began in February. Keep in mind that due to the way growth rates are calculated, the economy is still about 13% below where it started the year, let alone where it would be if growth had continued apace. It's also important to remember that economists annualize these numbers for easier comparison - i.e. they represent what would have happened if each quarter lasted a whole year.

The strong Q3 growth rate reflects the fact that many parts of the economy have been able to endure and recover. This is because businesses not directly impacted by COVID-19 have been able to operate remotely or were able to reopen once nationwide lockdowns eased. Of course, this is not true across all industries and there are still nearly 8 million Americans receiving jobless benefits each week. The second half of this recovery will be more challenging and may require balancing economic and public health objectives. Current forecasts among economists are for more moderate growth of 3 to 4% each quarter into 2022.

With the presidential election upon us, there is both blame and credit for the COVID-19 recession and recovery being passed around. While personal political views are important, the hallmark of a disciplined long-term investor is the ability to set these aside when managing finances. The reality is that it's unlikely that the recession would have been avoided or the recovery would have been any less strong under either party. In most cases, who controls the White House or Capitol Hill matters less than the forces that drive the economy and influence the stock market.

Of course, this hasn't stopped financial markets from growing antsy in recent weeks as the election nears. Stock market volatility has picked up with large daily swings and the biggest one-day decline (-3.5%) since June. So far, 2020 has seen more hypothetical 5% stock market declines than any year since 2008. For investors focused on the day-to-day, it's felt like a rollercoaster ride.

It's times like these when it pays to be disciplined and seek level-headed advice. Trying to jump in and out of markets, whether because of a short-term correction or around events like the election, often hurts more than it helps. Instead, history shows that focusing on the bigger picture is what improves the odds of achieving financial goals. Below are three charts that can help investors to stay focused in the days and weeks to come.

1. The economy came roaring back in Q3 but still has a way to go 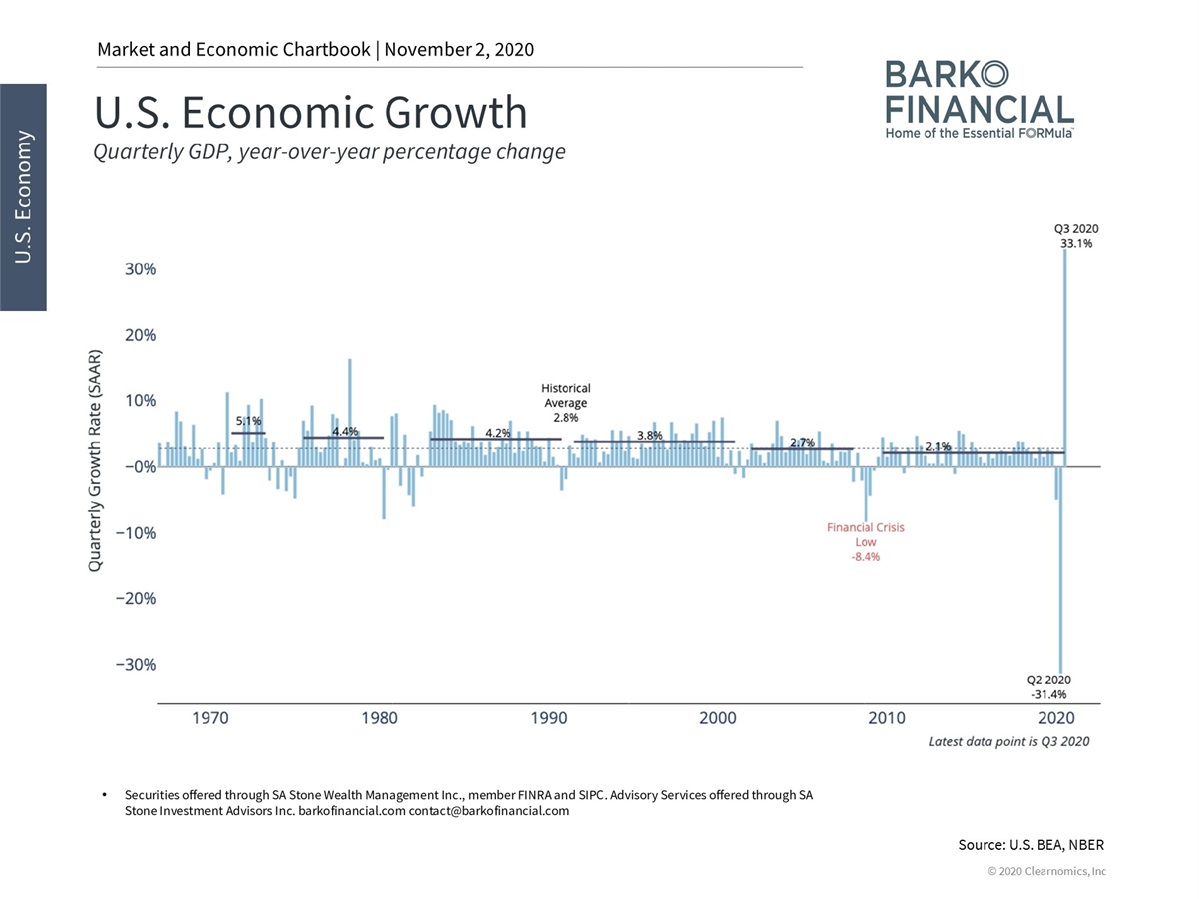 GDP grew by 33.1% in the third quarter after declining by 31.4% in the second on an annualized basis. These are the best and the worst growth rates on record, respectively. These numbers reflect the economic recovery that has taken shape, especially in industries that have been able to weather the shutdown and even grow during the pandemic.

2. This is the most turbulent stock market since 2008 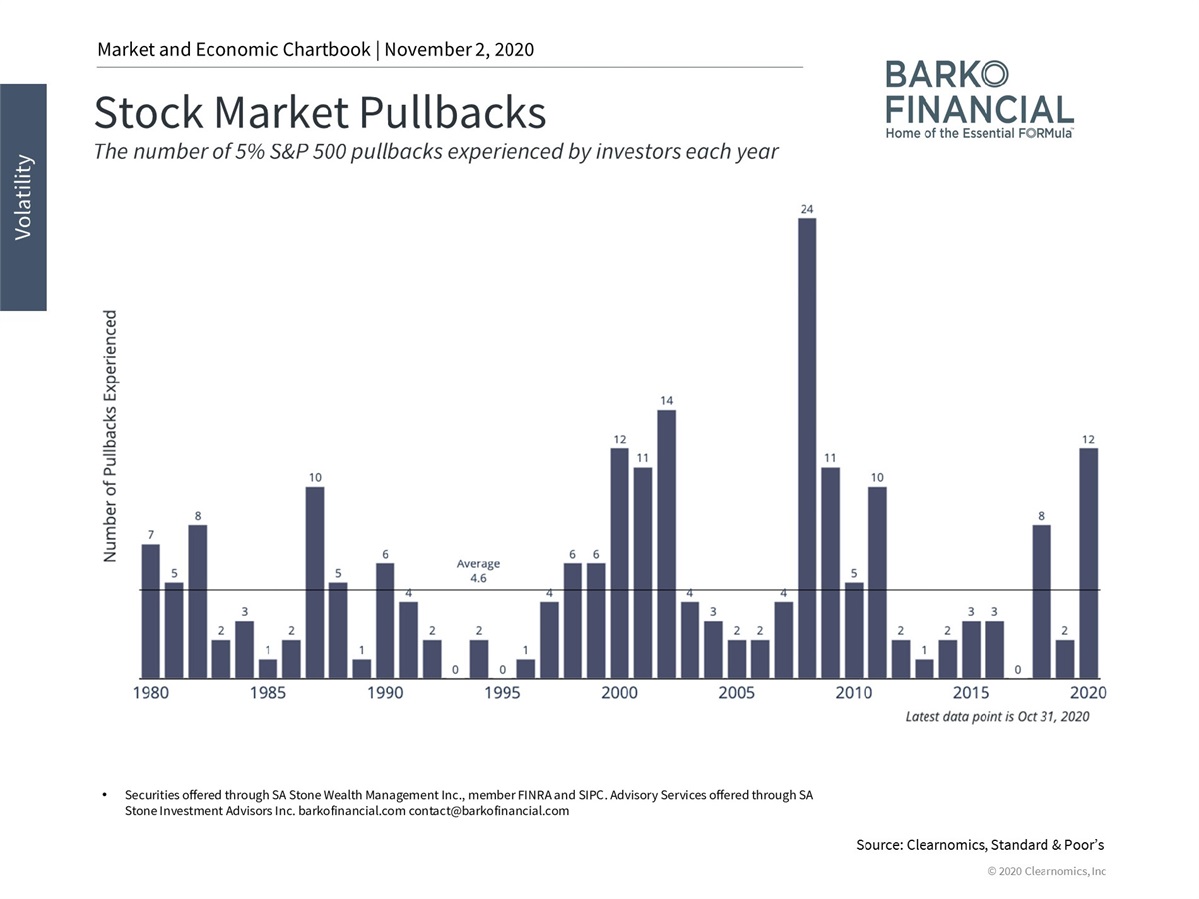 Despite positive economic trends, the stock market continues to be volatile due to uncertainties such as the presidential election. A hypothetical investor who checks their account statements often would have experienced a dozen 5% market declines so far this year, the worst since 2008.

3. It pays to be disciplined and invested in uncertain times 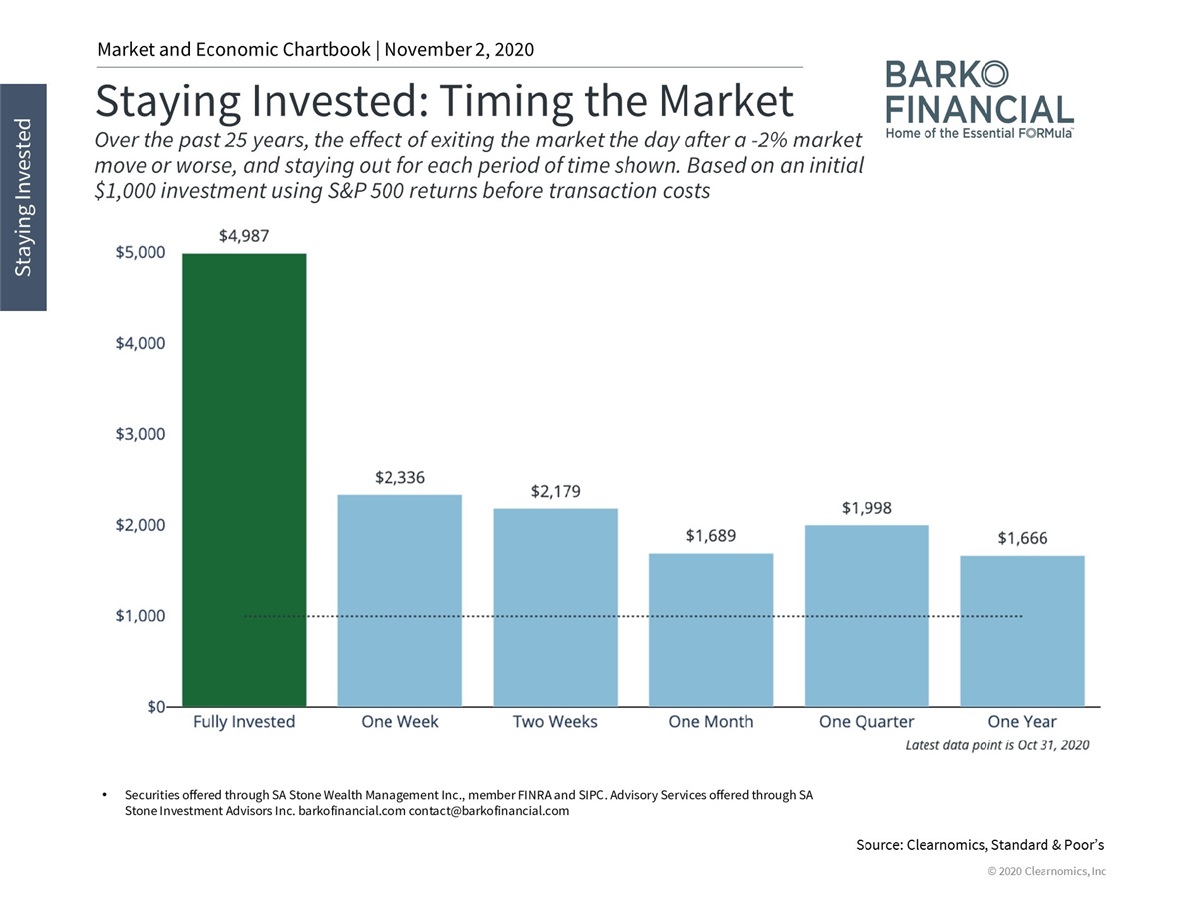 Despite the rockiness of the market this year, history shows that it often pays to stay invested and focused on the long run. Overreacting to short term declines, even when they are 2% or worse in a single day, is often counterproductive. Markets tend to rebound when investors least expect it - exactly what has happened since March.

The bottom line? Investors ought to remain focused on the long run despite uncertainty around the election and other news headlines. History shows that those who can stay invested through turbulent periods often have a better chance of achieving their financial goals.